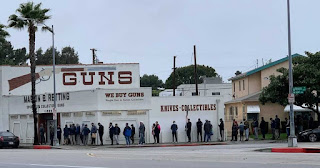 This extends to other parts of life as well. There is a need to learn basic skills in first-aid, mechanical devices. We can't just rely on apps to get us through tough times. Each individual must be able to conduct some degree of action to protect themselves.
Posted by Gun News Blog at 5:51 PM

Email ThisBlogThis!Share to TwitterShare to FacebookShare to Pinterest
Labels: GNBarticle