Glock vs Sig as MHS program saw it

The recent decision by US Army to get Sig P320 as M17 pistol caused quite a bit of controversy. As with any large government procurement, there were objections and protests, notably from Glock.

In short, SIG P320 was selected mostly due to the fact that it was way more cheaper. But it wasn't just about the price of the gun, it was about the cost associated with licensing.

Let's take a look at the evaluation. There were 9 factors.

Among these factors, only Factors 1 and 2 were about the gun itself. 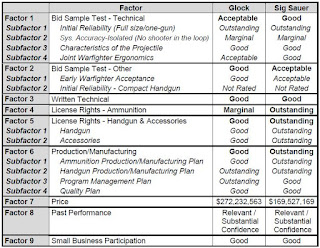 Looking at the Factor 1, both Glock and SIG were neck-to-neck, except on ergonomics. Glock's ergonomics has been a point of contention for some and it seems like this again rear its ugly head. In initial phase(Factor 2, subfactor 1), Glock did receive better acceptance.

In rest of factors, you can see that SIG's offering was substantially better than Glock's. In fact, the price difference is the biggest reason why SIG won.

This is funny considering that SIG lost to Beretta in XM9 trial. Beretta outbid SIG by a small margin in cost at the time.

In the protest, Glock noted that the price was miscalculated, which was true but not grave enough to sway to numbers in Glock's favor. Glock also had higher fee for licensing and ammunition supply, including blank rounds.

An interesting point was the part about second phase(section H) of the MHS trial. The program was supposed to down-select at the initial phase(section M), then use slightly different testing in the second phase. 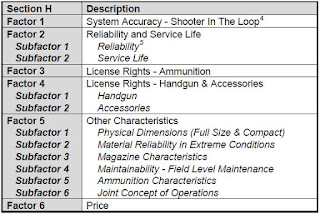 Glock's protest was that the program was incomplete since phase 2 was not done. However, GAO noted that just because the first phase was going to choose up to 3 doesn't mean that the whole trial has to have more than just 1 selection.

The criteria in the second phase maybe could have made difference for Glock, but it's now going to be unknown.

In the end it came down to the fact that both guns performed well enough, and SIG had better price.

For average shooter, it means it really comes down to personal preference. An Average shooter doesn't have to worry about cost of having a large stock pile of parts and support.

The photo of the Glock's MHS entry is now out. It looks like Gen5-ish fram with Glock 17 length grip and ambidextrous safety added. 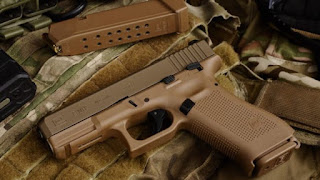 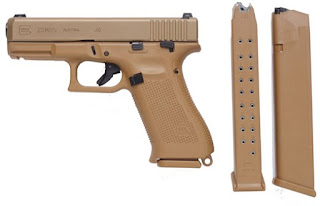 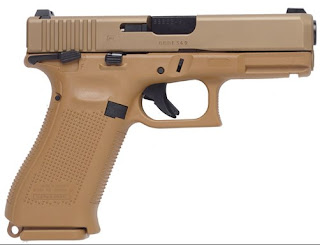