Recently, John "Shrek" McPhee talked about the Pie Chart. Pie Chart is the shooting diagnostic chart that shows why your shots are going to a particular spot


The origin and the circumstance around the birth of the chart is a bit murky, but there are some criticisms such as the chart being made by a traditional marksmanship shooters who only used one hand shooting. 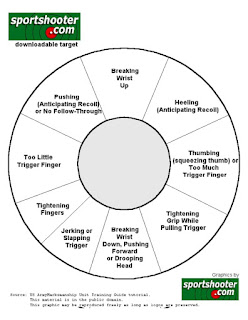 There is slightly easier, maybe geekier way to diagnose a shooter's problem.

Horizontal movement generally mean there is something wrong with thumb or index finger. Too much or little index finger placement on trigger can shift the gun when fired.

Vertical movements generally mean shooter is flinching or anticipating recoil and try to compensate by moving the gun up.

Combine the two and you can see the problem you need to work on.


From: TriggerTimeTV
Posted by Gun News Blog at 1:00 AM